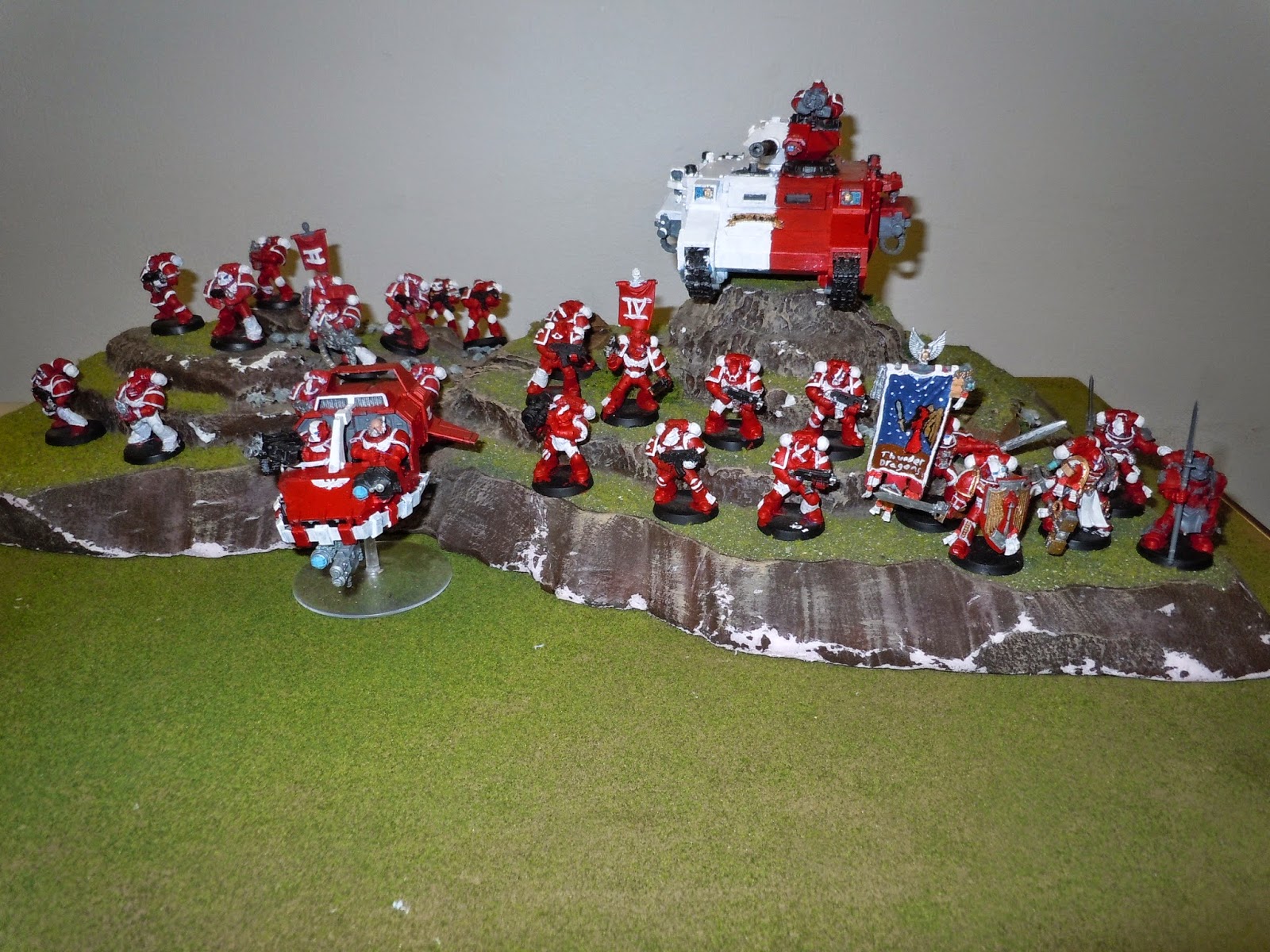 Finally, after a long period of delaying and procrastinating, I have completed 3/4ths of my Space Marines: The Thunder Dragons. In Total, I have roughly 80 Marines. I only have about 50 painted, and only 35 are present in the picture to the right.
I have names and ranks for them, I will fill out the list complete wit pictures when I finish my remaining Astartes.


The Fluff: Long ago in M.31 when the Lion ordered the Destruction of Caliban, A select few of Luther's followers were ordered to leave the planet and spread to the farthest reaches of Imperial Space to bring unite the true followers of the Emperor to be witness to the traitorous actions of the First Legion. Their Leader, Hector Apophys, acted as a shepherd to the lost flock that was now called "The Fallen", uniting them into a singular force that quickly vanished into the unknowns of space. It wasn't until M.38 in Abbadon's Ninth Black Crusade that an unknown Astartes Chapter was seen fighting alongside Imperial forces on Corillia against the traitor marines. These Astartes wore blood red power armour with white trim, white streaks in a warpaint fashion, and deep sea blue eye visors. In the field of battle these Astartes were fearless in their assaults on Abbadon's forces, often going to suicidal lengths to destroy their enemy. The only battle cries they cried were for a man named "Luther."
At the end of the crusade when Corillia was finally relieved by the Ultramarines, the Astartes vanished from the planet without a single trace of their being there.
In various conflicts following the Ninth Crusade, these same Red Warriors would appear and smite the enemies of the Imperium. It wasn't until M.40, when questioned by an Astartes from the Black Templars about their Origin that the a Red Warrior finally spoke to an outsider. "Who are you, Brother?" The Templar was said to ask.
To which the Thunder Dragon replied: "I am a Thunder Dragon, and I fight in the name of Truth and Revelation."
The Templar was confused. "Thunder Dragon? Who do you follow?"
The Thunder Dragon stood tall. "I serve the Emperor, and follow my Lord Hector." 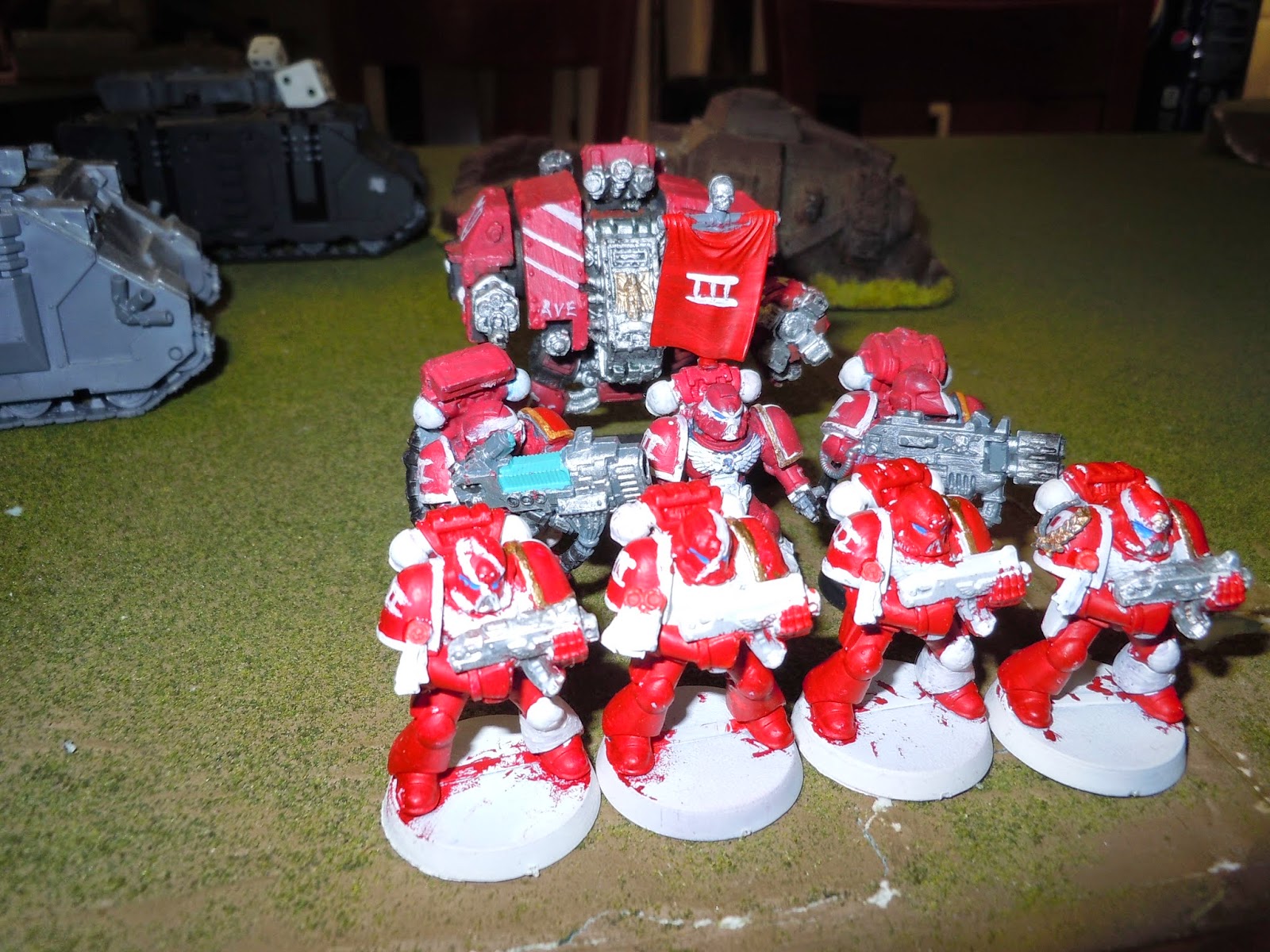 These are the two pictures I have. To the right is a picture of my 'Hades' squad. The front four marines are 2nd or 3rd edition marines courtesy of Colonel Scipio. The picture is a bit bright due to the flash, but you can just make out the detail on them. Each one has a purity seal on the right pauldron to help distinguish them from the rest of the squad. 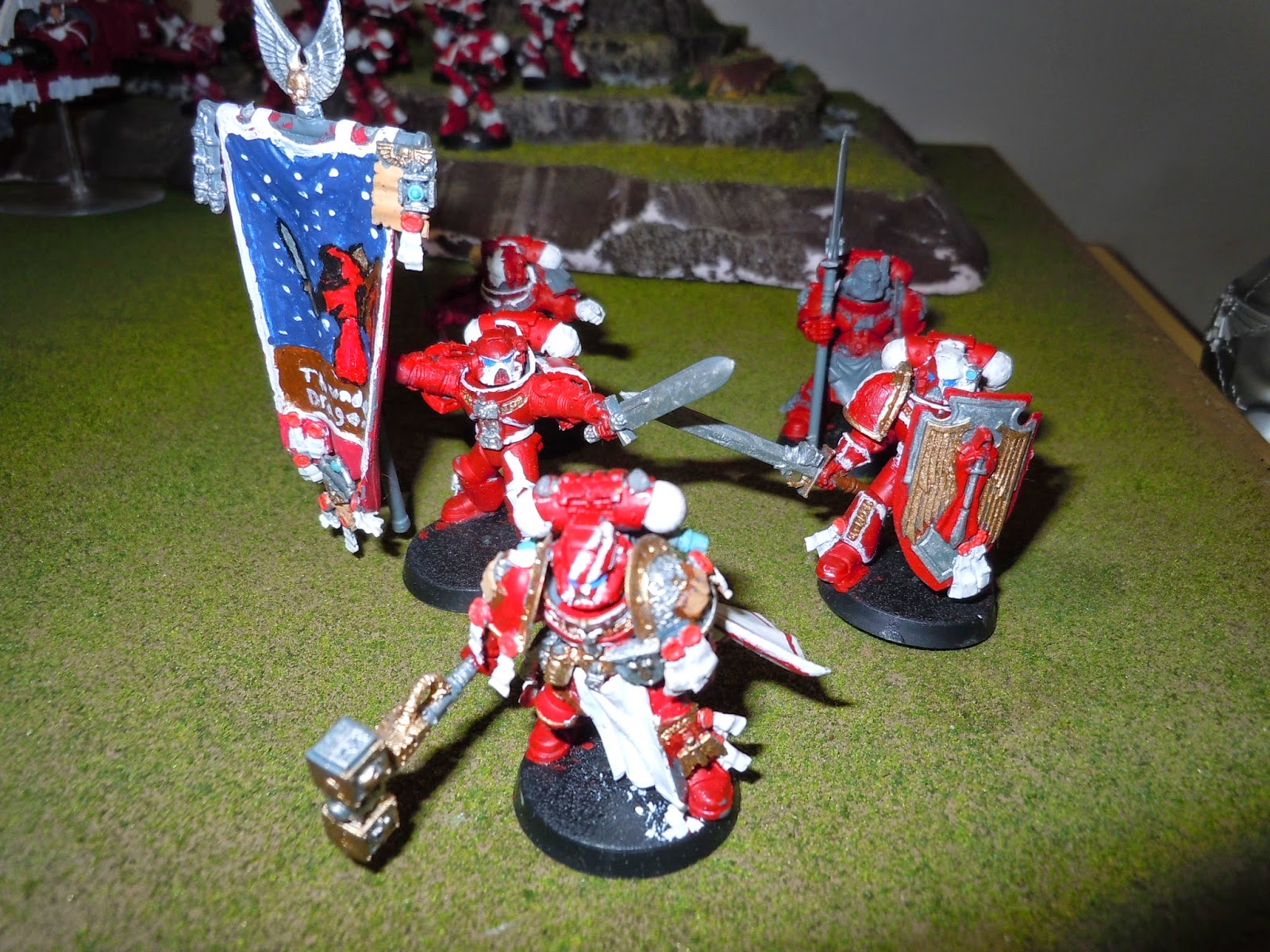 My Chapter Master is equipped Artificer armour along with a Thunder Hammer. I wanted him to look more unique, so I used Grey Knight bits along with a Commander kit to formulate a special appearance. I trimmed him with gold and silver, and added a great many purity seals and other small trinkets that I feel really bring out the model. The banner to his left I hand painted, attempting to make a Watcher in the Dark holding a sword. Considering the freehand, I feel it turned out nicely. The man to his right is my Chapter Champion. I used a Deathwing shield and a Grey Knight sword to give the appearance of an old 14th Century knight. The two guys behind the Shield-Bearer and the Standard carrier are just holding Halbards, not finished painting at the time of this picture.


Anyway guys, hope you enjoyed the pictures and the fluff. Any questions, comments, or recommendations just leave a comment and I'll get back to you. Stay frosty out there!

Posted by Unknown at 7:33 PM No comments: