Well guys, it's been a while. Here is a summation of events of the campaign. There have been two battles, lost to the annals of history.
Summed up: The tau arrived and pleaded for assistance from the Imperials, specificially the steel nightmares. In exchange for helping fight the heretics, the tau will be given mechanical assistance.

Leytan city was secured in a bloody, bloody fight. It was an apocolypse size game that left hundreds dead or wounded. However with the securing of the Leytan spaceport, The Imperials can now reinforce themselves. The lack of supplies and men will lead to massive refit operation and supply drops. The rest will be revealed in the next arrakian accord proper. 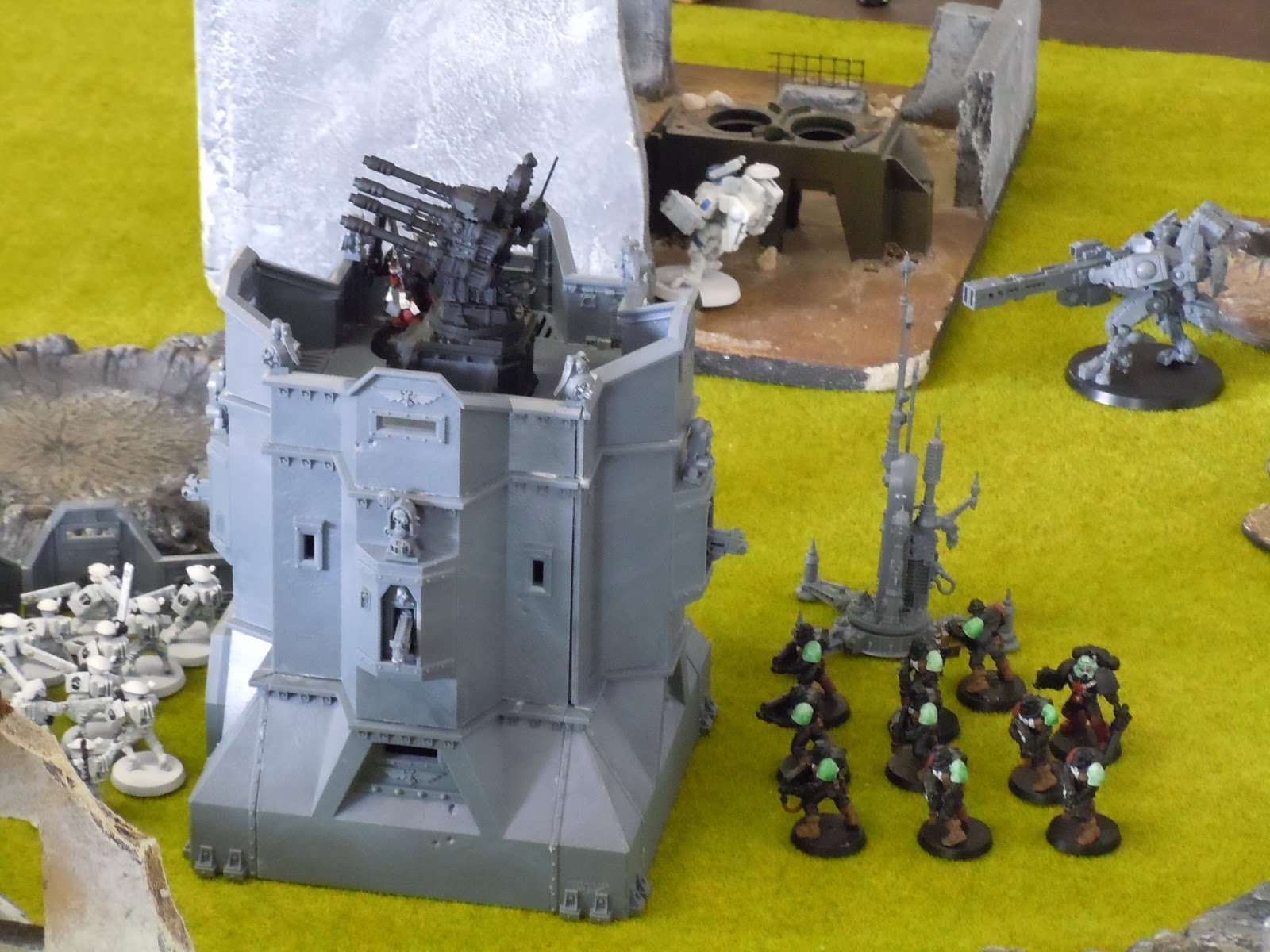 Posted by Unknown at 4:54 AM No comments:

This was a quick 2,500 point 2v2 battle that James and I had with a couple of buddies on Saturday.  I apologize for the lack of pictures on this but my camera has a bad battery right now.

Turn 1a: James' team had the initiative that I utterly failed to seize.  He had the Sentry Veterans infiltrate on to a skypad that was made better by their Techmarine.

Their movement consisted of moving the two Demolisher Russes forward, while the Venerable Dreadnought and the left field Rhino scurried into cover.

First shots rung from the Sentry Vets aimed at Tactilas Squad 1 (sitting on top of a upgraded ruin).  Three hits resulted, but zero wounds came about.  Both Demolisher Russes fired at the Command Squad (in another upgraded ruin) to cause a whopping three casualties.  The Razorback shot at the other Tactilas Squad 2 which resulted in one dead marine.

Turn 1b:
A Veteran Squad and Venerable Dreadnought moved out of their ruins while the the Vindicator rolled into one without getting immobilized.  Attack Bike Squad (and attached Master of the Forge) drove the edge of the board behind a building.  Melta Squad Rhino blitzed forward as far as it could.  The Lasorback moved clear of the Thunderfire Cannon's view.  Last move was the repositioning of the Lasdator.

First, an artillery strike was called upon the Sentry Vets, but rolled off onto the Command Russ without damage.  The Thunderfire Cannon unleashed a barrage of air-bursting shrapnel that killed three of them.  Both melta weapons lined up their snap shots on a Demolisher Russ, and miraculously hit and penetrated with both.  This resulted in a tank with a stunned crew.  The Hunter (sitting behind a chest high wall) fired at the right field Rhino, but failed to score a hit.  Tactilas Squad 1 immobilized the Lord Commissar's Chimera.  Tactilas Squad 2 and the Leman Russ destroyed both weapons on the enemy Razorback.  Lasorback takes aim at the side armor of the Command Russ and penetrates it.  After barely failing the cover save, the tank suffered an "Exploded!" result.  Lasdator turns the other Demolisher Russ into an exploding husk with a single shot to the side armor.  The Vindicator breached the side armor of the remaining Russ and made it a wreck.  Finally, the Rhino popped smoke.

Turn 2a:  Despite the success of the Officer of the Fleet, all reserves come into play.  Sentinels and Scouts outflank into the corner behind the Thunderfire Cannon.  Banewolf outflanks into position behind a Vet Squad squatting in ruins. Stormraven flies straight at my Venerable Dreadnought.

The ruined Razorback retreats behind cover as their Dreadnought marches forward.

Scouts immediately open fire on the Techmarine stationed at the cannon; killing him instantly.  Sentinel Squad unleashed their arsenal into the back of my allies' Leman Russ which only resulted in one hull point taken.  Sentry Vets fire again at Tactilas Squad 1, but fail to cause a single wound. Stormraven and Chimera unload everything they have against the Venerable Dreadnought to a result of two hull points taken and a crew stunned.  The Heavy Bolter sitting in the left field Rhino manages to pierce the smoke cloud and glance the side armor of my sole Rhino.  Banewolf spewed its toxic concoction into a crowd of Veterans; killing six of them.

The Veterans who suffered from the Banewolf's attack had held firm their resolve and stayed put.  I failed both of the "It Will Not Die" rolls, so neither the Dreadnought or Rhino got anything back.

Turn 2b:  My ally managed to get ally of his reserves onto the table.  One squad of Veterans rushed up right behind his Leman Russ.  The other two showed up around the Banewolf.

Master of the Forge and his squad hightail it back to their original (except facing the Sentinels).  Sternguard Vets abandon their Lasorback while the accompanying Techmarine went to man the Thunderfire Cannon.  The Melta Squad jumped out of their Rhino as its engines gunned it forward as far as possible.  Though badly damaged, the Dreadnought stepped towards the Lord Commissar and his Vets.

Sternguard Veterans decimate the entire Scout Squad with a hail of Kraken Bolt rounds.  The Attack Bikes blast away at the Sentinels with their Multi-Meltas; resulting in two being immobilized and the other merely being shaken.  Leman Russ fails to score any hits against the enemy Dreadnought.  Krak grenades thrown by two entire squads of Veterans only take a hull point from the Banewolf.  One shot from the Lasdator causes it to explode, which kills a combined three Veterans from both squads.  A combined attack from air-bursting shells and an artillery strike kill six Sentry Vets.  Lasorback fails to do any damage against enemy Rhino.  Demolisher shell from the Vindicator veers off of the Chimera and annihilates the Lord Commissar's squad.  Everything else (that could) fires at the Stormraven, but does no damage.

The lone Sentry Vet failed his morale and ran off the board.

The Attack Bike charges the Sentinels and utterly fails at their "Hammer of Wrath" and normal attacks.  When the Sentinels retaliated, they killed a marine.  Last to attack was the Master of the Forge who, with his four attacks, caused all three Sentinels to explode (killing a Veteran who was really close to the action).  With their consolidation, they headed back up the board.

It was at this point that James' team decided to surrender the match.